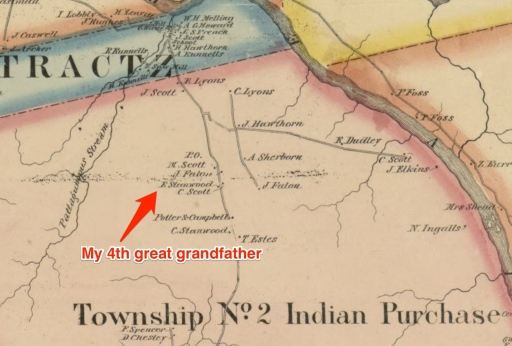 A portion of the 1859 map of Penobscot county, Maine

I love maps. They often hold the keys to learning more about our ancestors. They place these people in context with those with whom they lived. They show a community, give us an idea of of who their friends, family and associates were. They simply make it all “click” for me, connecting the dots in a way nothing else does. Finding those maps, however, can be exceptionally challenging.

Consequently, I’ve spent the better part of the last nine years looking for maps of early Penobscot county, Maine. Specifically, I wanted to see where the families lived who resided in the towns of Chester and West Indian Township (now known as Woodville, and formerly Township No. 2 Indian Purchase).  Imagine my delight a few weeks ago when I finally found the online images for the 1859 map above, clearly indicating my great-great-great-great grandfather, Benjamin Stanwood, lived in North Woodville, just south of the Pattagumpus stream.

Thrilled to be headed to Maine this week, I had noble aspirations to find Benjamin’s homestead.  I realized it was unlikely I’d actually find THE property, but hey, a little determination goes a long way!  We arrived on Friday, too late to hit the county recorders office for info, so my son and I started our day on Saturday at the public library in the nearby town of Lincoln.  Initially disappointed there were no platt maps or other tools to further locate the property, I decided to put aside my quest and began working through the related genealogical materials for additional family info.  Imagine my absolute shock and surprise when I saw the following in the second book I opened on the Libby genealogy (a collateral line):

“[Phineas] then purchased a farm with buildings in North Woodville, from Benjamin and Bessie (sic) Stanwood.  Phineas lived here until his death.”

WHOO HOO!!!  OMG!!!  My son kept saying, “you sound just like those people on ‘Who Do You Think You Are’!”  (This was his first time joining me on a research trip, or he’d have been well aware I’ve made similar exclamations over the last twenty or so years!)  Now I had something I could work with, a clue to assist in identifying the actual location of Benjamin and Betsey’s home.

Map in hand (okay, well, loaded on my iPad), my son and I headed north on Route 116 into Woodville.  Using a photo of the home shown in the same book, we drove up and down the main highway, hoping to spot a structure in the general location the map portrayed the Stanwoods would have lived.  Up and down, up and down, we finally conceded that the house’s appearance was likely altered over the last 113 years since the photo was taken, or, even more likely, the structure was torn down.  So close to finally discovering, I decided to ask around and see if any “old timers” may know where the old Phineas Libby home was.  We struck pay dirt when we finally found a gentleman who informed us he didn’t know where Phineas had lived, but that his next door neighbor was a Libby.  She died several years ago, but her granddaughter lives across the street!  Whoooo hoo again!

With no phone number, my only alternative was to go knocking on this person’s door.  Knowing any Californian (which I myself was until 11 months ago!) would be very suspicious of a stranger just meandering on up with such odd questions as I had, I wasn’t sure how much information I’d receive from this Mainer.  Undaunted and determined, however, I parked in the drive and headed up to the front door, and soon thereafter met my fourth cousin, a Libby descendant, who is blessed to be living on the property owned by our mutual ancestors, Benjamin and Betsey (Wasgatt) Stanwood.  I found it!  Not only was this new-found cousin generous enough to show me around her beautiful property, she and her husband invited me inside and allowed me to scan some of their family photographs.  (So glad I had my FlipPal mobile scanner with me!)  I will be meeting with her again on Tuesday, and will also get to talk to her mother who may be able to share additional information on the family.

I called my husband after we left my cousin’s home and told him that if I found nothing else in my remaining time in Maine, that would be okay.  I had accomplished my primary goal on Day 1.  But my serendipity does not end there….

Today Jeremy and I decided to go to Ellsworth to visit one of my most favorite places  – the Big Chicken Barn where they are loaded with many rare books on Maine and New England.  I always find something there that I can’t live without, and today was no exception.  I just could never ever have anticipated today’s find…..an original, 1859 map of Penobscot County, Maine.  Yes, the very map that I’d seen online that led me to my ancestor’s home and to my new cousin just yesterday. 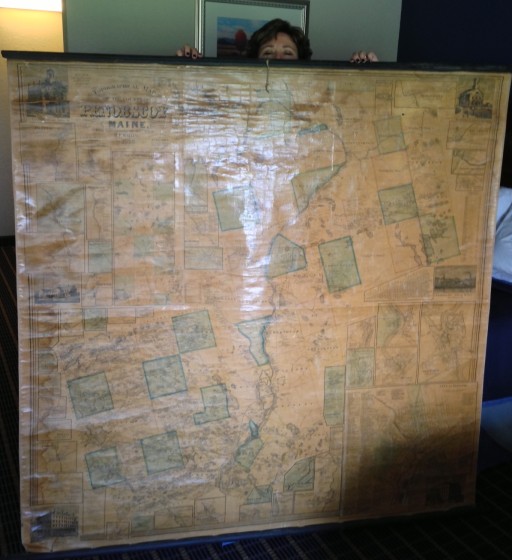 The map is quite weathered and worn, and will need to be repaired and framed; however, it’s sign of aging just makes it more precious to me.  Yup, my genealogy angels have been working overtime, leading me down the right paths, to the right places…and making me one incredibly happy genealogist.

This entry was posted on Sunday, June 30th, 2013 at 1:11 PM and posted in Maps, My Family Lines, Research Trips, Stanwood. You can follow any responses to this entry through the RSS 2.0 feed.
« Madness Monday – Looking beyond the surface leads to missing Uncle Fred
Mary Hill’s Legacy webinar “Land Records Solve Research Problems” really solved my research problem! »