As Elizabeth Shown Mills states, often we will never find the “smoking gun” – that single document which states the parentage of an individual. This is certainly the case with Cynthia (Day) Bursley, who was born in rural Maine in the early nineteenth century, in a place and time in which few records were kept. In fact, the first known record directly naming Cynthia was the 1850 Federal Census, in which she was enumerated in Bangor, Maine at the age of 37 with her husband, Benjamin Bursley.1 Despite this obstacle, however, using evidence-based reasoning, along with the genealogical proof standard, one can deduce Cynthia’s parentage with a high degree of confidence.

Cynthia Bursley died 13 May, 1874, in Santiago, Sherburne County, Minnesota, at the age of 60 years and 3 months.2  (We can thus extrapolate her birth as approximately February 1814.) The certificate of her death states she was born in Maine to parents simply listed as “________ Day.”   This document also indicates her parents were natives of Maine as well.

Nearly twenty years later, in 1892, Cynthia’s daughter, Lavina (Bursley) Stanwood, began the process to probate Cynthia’s estate.3 These documents confirm that Benjamin Bursley, with whom Cynthia was enumerated on the 1850 and 1860 U.S. Federal Censuses, was in fact, her husband.

Probable marriage and birth of children in Lagrange, Penobscot, Maine

It is likely that Benjamin Bursley and Cynthia Day married about 1834 or 1835 in or near Lagrange, Penobscot County, Maine, where we find the following births recorded in the Lagrange Town and Vital Records:

The oldest children appear to have died by 1850, when the U.S. Federal Census enumerated Benjamin and Cynthia with three children in Bangor, Penobscot County, Maine:8

John Day, a resident of nearby Kilmarnock (now Medford), Maine, was a close associate of Cynthia’s husband, Benjamin Bursley.  Attested to by John Day on 23 March 1841, is the following, which appears in the Lagrange town records:9

Know all men by these presents that I Benjamin Bursley of Lagrange County of Penobscot and state of Maine Joiner, in consideration of hand which Stephen Danforth of the same Lagrange hold against me March 23, 1841 for Eighty Dollars payable in three years from next December with interest, do sell and convey unto the said Danforth one Brown mare….

By 1854, Benjamin and Cynthia had apparently relocated to Kilmarnock, where Benjamin was the town clerk, completing two entries in the town records on 17 June 1854 and 27 October 1854.11 After Benjamin’s move to Minnesota in November 1854, John Day assumed the role of town recorder, as his entry into the town records on 23 May 1855 follows Benjamin’s.

Tying it all together to determine Cynthia’s parentage

While Cynthia (Day) Bursley left behind no records to definitively state the names of her parents, and no document suggests siblings or other extended family members, multiple sources lead researchers to one conclusion: Cynthia was the daughter of Aaron Day and his wife Martha, and the sister of her husband’s close associate, John Day.

Map of Days in Maine

Geography was perhaps the largest factor in the selection of a mate for those living in the nineteenth century. Potential marriage candidates were generally limited to nearby neighbors. Cynthia’s marriage to Benjamin Bursley, the son of Lemuel Bursley and Lavina Spencer, clearly places her and her family in the region surrounding Farmington, Franklin County, Maine, where Benjamin was born about 1811 and where his family continued to reside.

Aaron Day and his family are found in and around the Farmington area in the early 1800s. A timeline is shown below:

Lucy N. Hutchins (1882-1969), the great granddaughter of Aaron’s brother John Day, wrote extensively about the Day family, providing intimate details of their lives. Lucy’s notes reveal that Aaron’s daughter Harriet was raised by his unmarried siblings, Nathaniel and Sarah, who resided in Winthrop, Kennebec County, about 30 miles south of Farmington.21 Cynthia may also have spent time with Nathaniel and Sarah, or with Lucy’s own great grandfather, John Day, who continued to reside in Starks, about 19 miles from Farmington. Since Cynthia’s presumed family resided in towns surrounding Farmington, she was provided the opportunity to meet Benjamin Bursley, her future husband.

After their marriage, Benjamin and Cynthia resided in Lagrange, Maine, just south of Milo and Kilmarnock (now Medford). The births of their first four children, Julia, Arlette, Benjamin and John are recorded there between 1835 and 1842. 22 Milo, a ten-mile distance from Lagrange, was the town where we next find Aaron Day and his sons, John and Joseph Warren:

After moving northeast to the Lagrange area, Benjamin and Cynthia remained in close proximity to her presumed family, and by 1854 the couple resided in Kilmarnock, the same town that Aaron and his sons John and Joseph called home.

Supporting Conclusion #2: John Day was the son of Aaron Day and his wife, Martha

John Day was born in Starks, Somerset County, Maine on 24 February 1809 to Aaron Day and his wife Martha. John was close to his father, inhabiting with his father one portion of Lot No. 1, the other half of which was purchased by his brother Joseph. Aaron continued to reside with his son in 1860, when he was enumerated on Federal Census in Medford. John was a close associate of Benjamin Bursley, attesting to the note Benjamin obtained from Stephen Danforth, using his mare as collateral. He also succeeded Benjamin Bursley as town clerk after the Bursley family migrated west to Minnesota in November 1854.

Supporting Conclusion #3: No other parental candidates

In 1814, Aaron Day was the only married male of the Day surname residing in the region by which Cynthia could have been fathered. His oldest brother, John, resided in Starks and had children born in 1811, 1814 and 1816,29 excluding him as a candidate. Francis Day, Aaron’s only other married brother, had his posterity recorded in the History of Monona County, Iowa, which states he “married Miss Elizabeth Hewins…having had only two children,” Franklin Augustus and Francis Jerome.30 Aaron’s two uncles, Daniel and David, also were not candidates: Daniel’s wife, Sarah Ross, was 53 years of age in 1814, and no longer of childbearing age.31  David Day, a widower at the time of Cynthia’s birth, is similarly excluded as a potential father for our subject.32

The known children of Aaron Day and Martha are:

As demonstrated above, Aaron and Martha added a child to their family about every two years. However, there is an approximate five-year time span between the last two children, Harriet and Joseph, providing the window of opportunity for Cynthia’s birth about 1814.

Names have long been passed down from generation to generation. Such is the case with Benjamin Bursley and Cynthia Day, who named their fourth daughter after Benjamin’s mother, Lavina (Spencer.) Bursley. Not surprisingly, the two youngest children born to Benjamin and Cynthia were named Aaron Day Bursley and Martha Eliza Bursley, lending further weight to our argument that Aaron Day and his wife Martha are the parents of Cynthia (Day) Bursley.39 Additionally, Cynthia was presumably the namesake for her niece, the second daughter of Nathaniel and Eunice (Boobar) Day, who was born in 1838.40

A photograph of a woman labeled Cynthia (Day) Lovejoy was listed on the “Scott Kentish and Border” Ancestry.com tree posted by user “devorguilla,” the great-great granddaughter of Cynthia’s presumed brother, Nathaniel. The photo provides another clue in tying Cynthia (Day) Bursley to her parents. An original of the same photograph is held by this author, contained in the photograph album passed down through the generations from its original owner, Lavina (Bursley) Stanwood, daughter of Benjamin Bursley and Cynthia Day. While the photo identification appearing on Ancestry.com seems incorrect (Cynthia [Day] Lovejoy died in Maine in 1867, age 29, and the photo was taken in Minneapolis, Minnesota in 1871 or later), it establishes an undeniable connection between the family of Cynthia (Day) Bursley and her presumed brother, Nathaniel Day.41 Not only does the photo provide evidence of the family connection, geography further confirms their relationship; Nathaniel and his family moved to Plymouth, Minnesota, and resided 45 miles from Benjamin and Cynthia, who lived north of them in Santiago.42 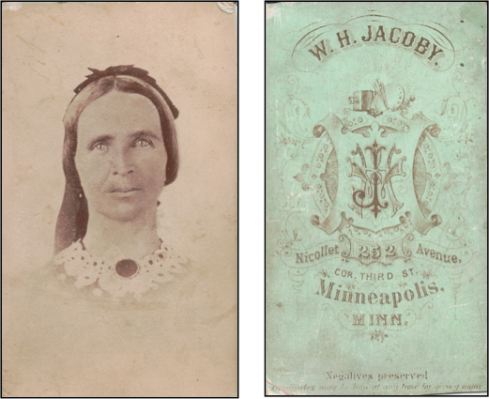 Autosomal DNA testing has confirmed a relationship between this author, the third great granddaughter of Cynthia (Day) Bursley, and multiple other descendants of Aaron Day and his siblings:

All available evidence indicates that Aaron Day and his wife Martha were the parents of Cynthia Day, the wife of Benjamin Bursley. Because women were not commonly mentioned in legal documents and were included in few records besides censuses during the nineteenth century, Cynthia’s life is largely traced through that of her husband. The identification of Cynthia’s parents is based on the seven documented conclusions detailed above. No evidence contradicts these conclusions.

This entry was posted on Friday, December 5th, 2014 at 1:51 PM and posted in Bursley, Day, My Family Lines. You can follow any responses to this entry through the RSS 2.0 feed.
« Mystery photo – are these Day family women?
Finding the families of Ernest Loren Simpson »