John Day, my 5th great grandfather, was baptized in Ipswich, Essex County, Massachusetts on 24 February 1750/1.  In earlier documents John was referred to as John Day Jr., so obviously other men of the same name lived in Ipswich.  To ensure my research centered on the correct John Day, I decided to do a bit more digging into taxes, deeds and other records.

As noted in the chart above, 10 individuals named John Day are recorded in the Ipswich vital records, with three dying in infancy. My ancestor, John Day #7, was born in 1750/1, and was the son of Jeremiah and Mary (Caldwell) Day. The only other adult male of the same name during my ancestor’s life was John Day #3, the husband of Eunice Burnham. John Day #7 is often referred to in town records and deeds as John Day Jr, distinguishing him from the elder John Day #3. The two men, both descended from sons of Robert Day and his wife Hannah, appear in red below.

Cousins John Day #3 and John Day #7 lived in Ipswich at the same time.

In addition to the use of the suffix “Jr,” the two Johns may also be distinguished in other ways. John Day #3, the elder, was sometimes referred to as “Mr. John Day,” a term often used to denote an established man of esteem. A young man typically would not have earned the title “Mr.” Therefore, references to Mr. John Day must refer to the elder John #3, born in 1696, and 55 years older than our subject, John Day #7.

The place of residence also provides clues to the identity of subjects in town records. John Day #3 is found living in the south part of the town, below the river, while John #7 resided near his family in Pine Swamp, north of the river and listed in the north town lists.

Mr. John Day appears third from the bottom on this 1770 South List Province Tax in Ipswich.

Only one John Day was listed in the tax lists in Ipswich for the years 1768 and 1770, and he was residing in the south part of town, across the river from our subject’s family.   He is referred to as “Mr. John Day,” ruling out our subject, John Day #7, who was a teenager during these tax assessment years.   Additionally, only one John Day appears in the 1771 tax valuation list, and it is most certainly John Day #3 who is taxed in all three assessments. John #3 would have been 75 years of age in 1771, with a well-established real and personal estate. The tax list appraises his real estate at £26 18s., and he had £100 lent at interest. Animals taxed were 2 horses, 2 oxen, 5 cattle, 20 goats and sheep, and 4 swine.   His land included 20 acres of pasture able to accommodate 150 cattle; his farm produced 150 bushels of grain annually; he owned 37 acres of salt marsh; produced 20 tons of salt marsh hay annually; had 4 acres of English and Upland mowing grass, and produced 4 tons of English and Upland hay annually.   Since our subject, John Day #7, was only 21 years of age, it seems quite unlikely the 1771 tax list refers to him. Additionally, December 1780 probate records show that John Day #3 was a man of means; land holdings were valued at £554, with his entire estate totaling £658.

Unfortunately, the town clerks did not clearly label each tax book during the years 1780-1850.   Because of this, we cannot ascertain in exactly which year the following tax was collected.   John Day #7 is still referred to as John Day Jr., so John Day #3 was still alive.  We do know that John Day #3 had his will probated 5 December 1780, and since John #3 appears in the following tax year, it seems likely that the entry below is actually for 1779, and not for 1780 as indicated on the microfilmed roll.

While the above image is not clearly legible, thankfully “Jr” was added to the name, denoting John #7, the youngest adult male of the name in Ipswich. The amount is illegible, but from this image we learn that John had money lent at interest, and appears to have been financially comfortable.

The next image is apparently from the subsequent tax year.   (The tax book and film was not paginated.)  Shown is John Day #3, who died before 5 December 1780 when his will was probated, so this tax year was very likely in 1780. 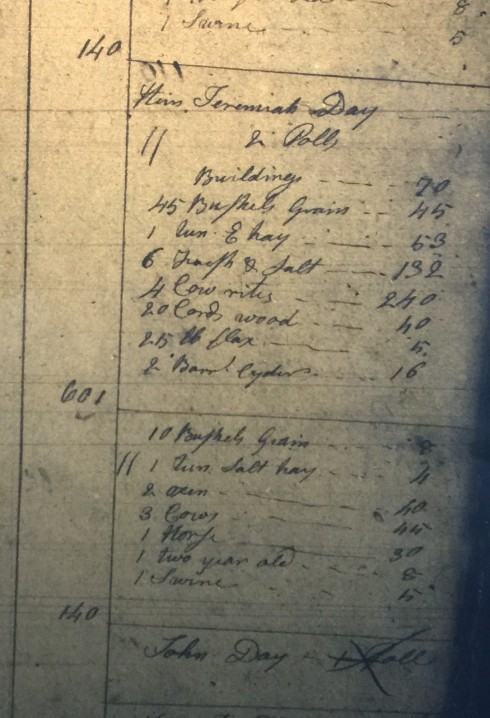 This entry was posted on Saturday, July 11th, 2015 at 10:10 PM and posted in Day, My Family Lines. You can follow any responses to this entry through the RSS 2.0 feed.
« Jeremiah Day of Ipswich – Cabinetmaker??
Books and more books: using Trello to track them »