The life expectancies of our ancestors

My grandmother never told her age. Ever. When I was a kid, she made it into a game but would never give me enough hints to guess. She said she’d be dead by the time I was 21, but that she would leave a note for me which I could open on my 21st birthday letting me know how old she was.  (She didn’t need to – I was nearly 40 by the time she died!)  Obviously, my grandmother clearly thought she would die young, and as her own mother was only 61 when she passed away from a heart attack.  I can understand – my own mother was only 63 when she died, and now that I’ve reached the half-century mark myself, my own mortality is even more real.   So….I decided to do a simple pedigree chart showing  my ancestors’ ages at death:

Of course, while I’m pleased to see those who enjoyed extended golden years, like most families, I also have my fair share of ancestors who went to the pearly gates in their 50s and 60s.  Analyzing this a bit further, the life expectancy of my grand parents, great grandparents and great-great grandparents looks like this: END_OF_DOCUMENT_TOKEN_TO_BE_REPLACED

Comments Off on The life expectancies of our ancestors | posted in Medical, My Family Lines 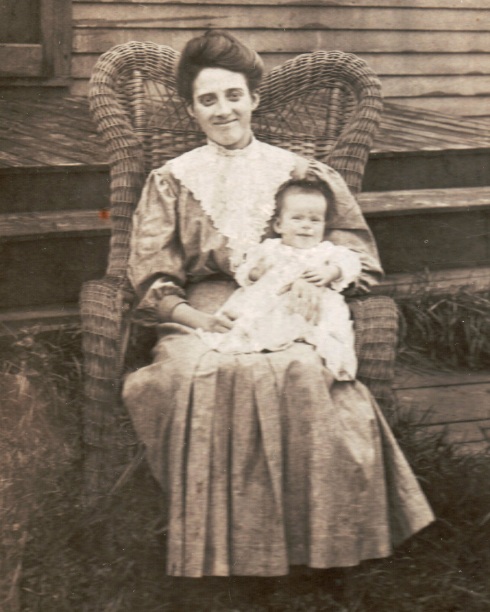 My great grandmother, Susan (Stanwood) Clark is shown above, holding my grandmother’s sister, Beatrice. My grandmother, Goldie (Simpson) Edwards, and Auntie Bea were the only surviving children born to Grandma Susie, who was herself one of eight children, seven of which lived to adulthood. Her father, Albert Stanwood, however, was one of only four children. Albert’s father, David, was from a family of six, born to Benjamin and Betsy (Wasgatt) Stanwood. Surprisingly, I’ve stumbled on a fair number of 19th century families in my genealogy (primarily in the Wasgatt lines) where only one or two children were born to the couple, while they were married many years. While not uncommon during current times, it certainly was not the norm in days past. It made me stop and ponder the reasons for these smaller family sizes. Infertility? Possibly. Choice? Maybe. But how? The Comstock law of 1873 declared birth control both obscene as well as illegal. So, what methods of birth control did our ancestors have available to them?