Thankfully there are many genealogy database programs to choose from, given one “size” (or application) does not fit all.  Additionally, there is no “right” program to use.  Software itself will not make you a better genealogist.  It’s the consistent use of the software – and being consistent in how you enter data – that WILL make a huge difference as you work on your genealogy.

Finding the right fit can take some time.  And even when you have a program you like, you may decide to play around with something new.  Such was the case when I decided to find a native Mac application after having used RootsMagic for many years.  I made a brief switch to Reunion 11 in 2015, but found that the software was too limited for what I wanted.  Instead, about 18 months ago I decided to climb on board with Family Tree Maker, and couldn’t be happier.  Now that FTM 2017 is out, I decided to highlight the features I love the most.

The feature that I loved most about RootsMagic was being able to see if a fact was sourced or not, and if it had associated media. However, even better than that is Family Tree Maker’s ability to show how many source citations are associated with a fact, in addition to the number of linked media items. 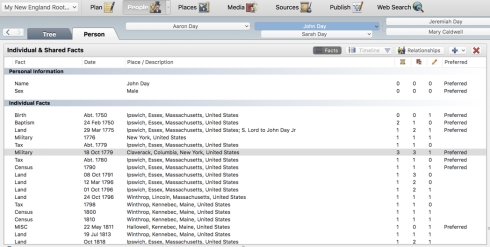 The number of sources, attached media and notes are visible for each fact in the Person view.

Comments Off on Why I love Family Tree Maker 2017 | posted in Organization, Technology

Uh huh, “The third time’s a charm!”  But…..I am hoping it doesn’t take me three times to get my sources correct.

In my last post I shared my transition over to Leister Pro’s Reunion software for the Mac.  END_OF_DOCUMENT_TOKEN_TO_BE_REPLACED

My genealogy do-over: switching from RootsMagic to Reunion for Mac

After spending the better part of a year working with Reunion, I’ve decided to make yet another switch.  I’ve concluded Reunion is quite limiting for my work flow; I need both the visual ability to see my file in a tree view as well as the spreadsheet view that I loved in RootsMagic.  That is, I love RootsMagic’s columns in which one can easily see at a glance whether there are sources, notes and media attached to each event.  In addition, I felt like I was forever clicking away to get to the correct screen in Reunion, and there was no way to see shared events with a spouse in Reunion on the individual’s page.  I’ve been dabbling around with Family Tree Maker the last couple of weeks, and after discussing the future of the program with their representative at NGS (see blog post here), I’ve decided to make the switch to FTM.  So far I’m loving the application.

At the risk of being called a genealogical heretic, I’ve come to the resounding conclusion that my genealogy software program is just that – a program that manages data and relationships in my family tree. It does not matter which program I use – just that it works in my workflow.

Hello? Are you still there? If you haven’t closed your browser’s window on me yet, here’s my rationale: whether I use Legacy, RootsMagic, Reunion or another program, the real work is done elsewhere – in Excel spreadsheets and Word documents.

While I have been one of RootsMagic’s biggest fans (and remain a huge advocate for the program), I’ve been debating a switch to Reunion since becoming a Mac user in 2013. END_OF_DOCUMENT_TOKEN_TO_BE_REPLACED

Comments Off on My genealogy do-over: switching from RootsMagic to Reunion for Mac | posted in Organization, Technology

Curio’s Evernote tab let’s you sort your Evernote notes by folder and tag so you can easily find the one you wish to import.

Stuff. Yup, genealogists collect a lot of stuff. We save stuff from the web, stuff we’ve been emailed, and yes, stuff we’ve created.

Lots of my stuff is saved in Evernote. Lots of it is in Microsoft Word. Some of it is in Excel. (I live by my spreadsheets!) Of course, there’s stuff saved from online books, databases, microfilm images, digital maps, mind maps, charts, and graphs and…well…you get the picture. There’s S-T-U-F-F all over my hard drive.

Usually this isn’t problematic, but sometimes I forget what stuff I’ve already collected. Despite my best efforts at keeping notes and research logs, if something is out of sight, it’s out of mind.

That’s why I LOVE Zengobi’s Curio!!! It’s became my favorite Go To app – it’s a must-have, can’t-live-without app that lets me take all that stuff and organize it how I see fit. Best yet, it interfaces with Evernote, allowing me to drag my Evernote notes into folders or blank “idea spaces,” which are blank pages that can be utilized to save images or other information. (Unfortunately, the interface is only one way – you can save and view the Evernote page, but cannot update Evernote from within Curio.)

Mostly I’m using Curio to organize info. I am in the middle of tracing my Tibbetts family, a line which I’ve just begun researching.   Curio let’s me take all that info and organize it in folders or sections. So, when I find information from a book, I can either save it directly into Curio using it as a note, I can save the image on my hard drive and drag it into a Curio folder, or I can save the info into Evernote and place it in Curio….the options are quite varied. The bottom line is I can save the info however I like, in a format that makes the most sense for me. END_OF_DOCUMENT_TOKEN_TO_BE_REPLACED 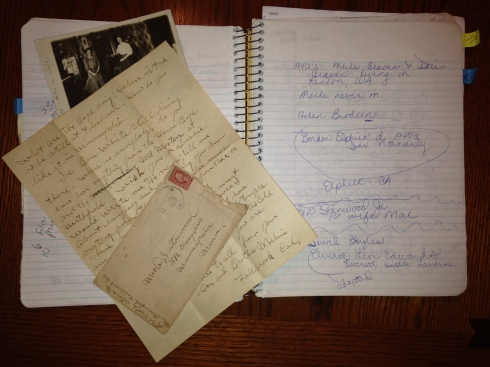 This notebook was used to hurriedly scribble down notes when interviewing my grandmother after reviewing old letters and photographs.

Spending the last few weeks working on a family history book has brought a few things to light. (Actually, it’s validated some of the mistakes I made along my genealogical journey.)  I hope my public confessions will help a newbie or two avoid some of my errors.  Here is my list of top things I wish I woulda done differently:

I fear my digital files are a lost cause.  Really.  END_OF_DOCUMENT_TOKEN_TO_BE_REPLACED

Comments Off on If only I woulda….. | posted in Learning, Organization, Technology

Don’t throw the baby (or the paper) out with the bath water….

Some of my labeled binders.

I really hate filing stuff.  (I believe I’ve mentioned that a time or two…or ten…in previous posts, lol.)  Hence, I’d made (the unfortunate) decision to go digital in my filing system a couple of years ago.  Of course, I kept all of the documents I had currently, as well as any new paper documents obtained from the courthouses or other places.   I dutifully scanned those documents, and numbered them using reference number by document type.  For example, all death certificates were numbered, beginning with the first certificate, which was DEATH 001, and the next DEATH 002, and so on.  The paper copies were kept in a binder of death certificates, and the electronic copies were kept similarly.  It seemed to make sense at the time.  I stopped printing things I’d found online, and only saved those items electronically.

This left quite a few problems, but it took a couple of years for them to surface. END_OF_DOCUMENT_TOKEN_TO_BE_REPLACED