On 27 November 1742, twenty-eight year old Elizabeth Day (daughter of Thomas Day and the great grand daughter of Robert Day of Ipswich) published intentions of marriage to Nathaniel Lord.  The two continued to reside in Ipswich, where they died and were laid to eternal rest in the Old Burying Ground. 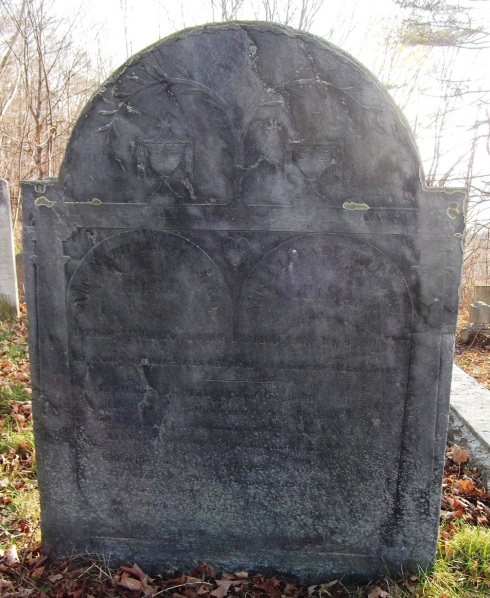 Nathaniel died 16 January 1800; however, he was likely in ill health for some time, as his will, dated 8 August 1796, was written nearly four years previous to his passing.  Included in the will was provision for the education of his grandson and namesake, Nathaniel Lord.  He wrote:

I bequeath to my Grand son Nathaniel Lord son of my son Isaac Lord a sum of money which [shall] be sufficient to pay the expenses & complete his Education at Harvard College to be paid by my said Executors at such Times as the Expenses and cost of his Education shall become due.

The younger Nathaniel, born 25 September 1780, was 16 at the time his grandfather was putting his affairs in order, and was likely already enrolled at Harvard; he graduated in 1798, and began a brief career in teaching before his appointment as the Register of Probate.

Nathaniel Lord, the son of Isaac and Hannah (Day) Lord, was the third great grandson of Robert Day, who emigrated to Massachusetts Bay in 1635.

From the History of Essex County, Massachusetts we learn:

Too much praise can scarcely be awarded to Nathaniel Lord for the fidelity, thoroughness and courtesy with which he performed the duties of register during his incumbency of thirty-six years.  Very many now living have cause to remember his kindness of heart, his timely counsel and his honorable deportment, both in business and social life, and the admirable method and system of the office under its present management is largely due to the high standard which he set up, while it was occupied by him.

Nathaniel Lord is buried with his grandfather in the Old Burying Ground, where his gravestone reads:

NATHANIEL
son of ISAAC and SUSANNA
LORD
Born 1780 September 25,
A graduate of Harvard College 1798.
Died 1852 October 16
For more than thirty [illegible] years
Register of Probate for the
County of Essex
Always faithful and conscientious
in the discharge of all his duties
as a Christian and a Patriot.
A kind and devoted father, this stone
is raised by the gratitude
and [illegible] of his children

While Nathaniel was beloved by his family and was respected for his work as Register of Probate, his success also served another purpose; it provided the means for the portrait shown above, likely one of the earliest portraits to found of a descendant of our progenitor, Robert Day.

Comments Off on Nathaniel Lord, the 3rd great grandson of Robert Day | posted in Day

Harriet Luzetta Day was the sister of my third great grandmother, Cynthia Sears Day.  She was born about 1812 in Industry, Somerset County, Maine, and became a teacher, probably giving up her occupation when she married Rowland Freeman in 1834.  Shown below is an arithmetic book owned by Harriet L. Day which I recently purchased off of eBay – another stroke of genealogical serendipity! 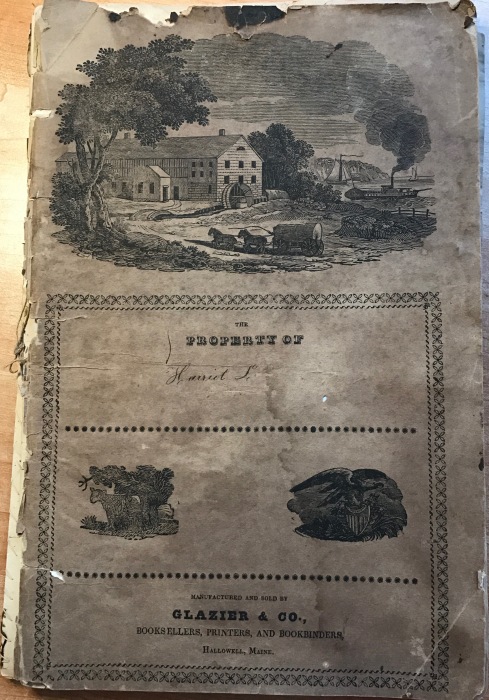 We know that Harriet was raised by her aunt and uncle, Nathaniel Day and Sarah Day, who were both unmarried and lived at home their parents.  Therefore, she would have known both her grandparents, but especially grandmother Sarah (Day) Day, who lived until 1845.  (Harriet would have been about 33 when her grandmother passed away.)

Inside the cover of Harriet’s arithmetic book is written Brownville, Milo, Kilmarnock, [-?-], and Kirkland

In the upper right corner Harriet wrote her name, town (“Hallowell x Road”) and the year, 1825.

It appears this family treasure was likely passed down to Harriet’s grandson, Rowland Pease.  Rowland married Mary Martha Wilson, who was the daughter Harriet L. Maynard.  Included in the book is the teacher’s certificate for Miss Harriet L. Maynard, and three Rewards of Merit for Harriet Maynard, Henry Maynard and Cyrus Maynard. 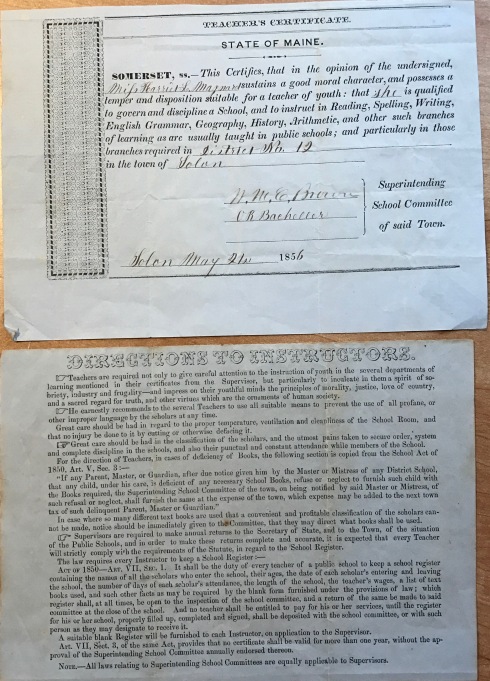 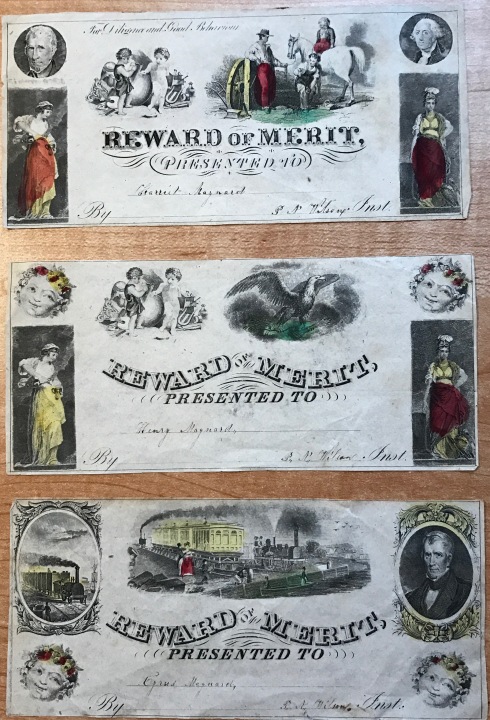 Rewards of Merit for Harriet L. Maynard and her brothers, Henry and Cyrus.

My parents met in the Army.  Not only was my mother in the military, but each generation of her family has been involved in major conflicts going back to the Revolutionary War.  I am proud of my military ancestors who served for our freedom.

The iPhone 7 was just released.  My iPhone 6 Plus is just fine though, although it just had it’s second birthday.  My case, however, is quite cracked and desperately in need of replacement.  My creative son suggested I buy a custom case, and thought I’d enjoy one with a genealogy theme.  So, off to Zazzle I went, and uploaded my image, one that I had previously created showing photos of me, my mother, my grandmother, back to my 2nd great grandmother, Lavina (Bursley) Stanwood.

Zazzle is offering 15% off, which was just enough to cover the shipping.  There are other companies that do custom cases, of course, but Zazzle seemed to have the best reviews and the cases were reported to be of better construction.  Can’t wait to get mine and share my genealogy with me where ever I go!

I toppled my self-created brick wall! 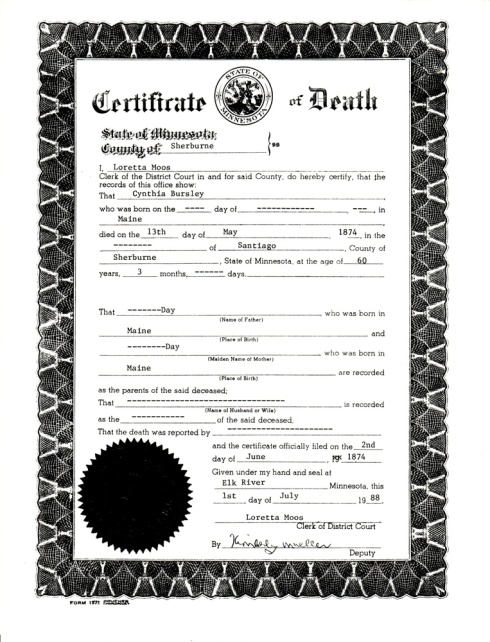 Death certificates are great sources of info – but the one above was frustrating to me.  I wanted to see the original death register from which the data had been taken.  However, I was told that privacy laws prohibited me from viewing the nearly 150-year-old book containing the death of Cynthia (Day) Bursley, my 3rd great grandmother.  After contemplating this dilemma, last week I found my nicest, kindest voice and called the County Recorder.  I followed my call up with a sweet-as-pie email thanking the Recorder for her time and asking for additional clarification as the state statutes showed that death records in Minnesota are actually public.  My persistence paid off.  Today I received the following:

Talk about Christmas in July!  Since the certificate above completed by the Clerk of Court did not list Cynthia’s parents, I assumed the register also did not have this info.  I was wrong!  After 2 1/2 years of working on a proof argument for Cynthia’s parentage, I finally have the smoking gun:  a piece of paper clearly stating Cynthia Bursley was the daughter of Aaron Day and his wife, Martha.  That brick wall wasn’t so thick after all!

A Patriot and a Red Coat in Concord, Massachusetts

My husband and I spent an awesome week in Boston, and enjoyed visits to Lexington and Concord, Cambridge, and my favorite town, Quincy. The latter included a tour of the homes where John Adams and his son, John Quincy Adams, were born, and concluded with a visit to “Piece field,” the enormous home where John and Abigail Adams made their abode after returning from Europe.

Reflecting on our nation’s history and the roles my own ancestors played in it, I’ve come to realize that U.S. history is now MY history. It is personal.

My ancestors were here during those early colonial years, and took an active role in events that shaped our nation. Not only did those events involve the men, but the women and children were dramatically affected as well; when their husbands went off to war, the women were left to carry on with her usual chores as well as maintaining the farm and managing affairs at home.

When I think about the sacrifices my forebears made for our country, I have to wonder – am I made of the same hardy stuff? Could I have endured the eight months my 5th great grandmother Sarah Day spent at home without word about her husband’s safety and well-being while he and the militia marched from Ipswich, Massachusetts to New York in 1776? Or when he was called to duty again in 1779 with his unit reinforcing the army under General Washington?

Yes, our ancestors, both male and female, have made many sacrifices to give us the freedoms and privileges we have in America today. For this I’m grateful and proud. I’m also cognizant that we have reached a crucial juncture in the 2016 election with two political candidates who have quite opposing values and world-views (not to mention political strategies). The outcome of November’s election will have a profound impact on U.S. history that has yet to be written. I’m sure I’m not alone with the sense of unease that often overpowers me when watching the evening news these days, listening to world events and thinking about the role our next President will play in them.    Our ancestors faced similar dilemmas in choosing the nation’s earliest Presidents; and like them, we must prepare for the upcoming election. We must cast our vote for the candidate we think will continue to move our nation forward to ensure our grandchildren and great grandchildren will be proud to be called Americans.

Missed NGS? Get a PlaybackNow package!

Are you an NGS left-behinder?  NGS has partnered with Playback to record the large majority of their sessions, and they offer a variety of packages for purchase.  Of course, you can order a la carte, and purchase only the lectures of interest, or you can buy the whole enchilada!  A 6-month “Fast Pass” allows you to listen to any of the recorded lectures for up to six months, and is the most affordable of the packages at $195 (conference special) or $295 for non-attendees or purchase after the conclusion of the show.  The 12-month Season Pass allows the same streaming as the 6-month package, but has the added advantage of download, so you can save the MP3s on your device to listen later.  More details can be found on the NGS site here and at the NGS Playback page here.

Comments Off on Missed NGS? Get a PlaybackNow package! | posted in Learning

The Future of Family Tree Maker

The genealogical community was certainly rattled when Ancestry announced the imminent retirement of Family Tree Maker (FTM) in December 2015.  Many people breathed a sigh of relief two months later when Ancestry shared:

So then, what exactly IS the future of Family Tree Maker?  I had the opportunity to explore this with Judy Wright, a volunteer and beta tester manning the Family Tree Maker booth at NGS, and asked her how Software MacKiev will ensure that the program remains solid for serious genealogists.  Will they consider the needs of the genealogy community as the add (or, gasp, remove) features?

Software MacKiev, according to Ms. Wright, has taken their acquisition seriously.

It appears that Sofrtware MacKiev is committing the resources to ensure Family Tree Maker remains a solid genealogy application for current and future genealogists for years to come.

The animals of my ancestors 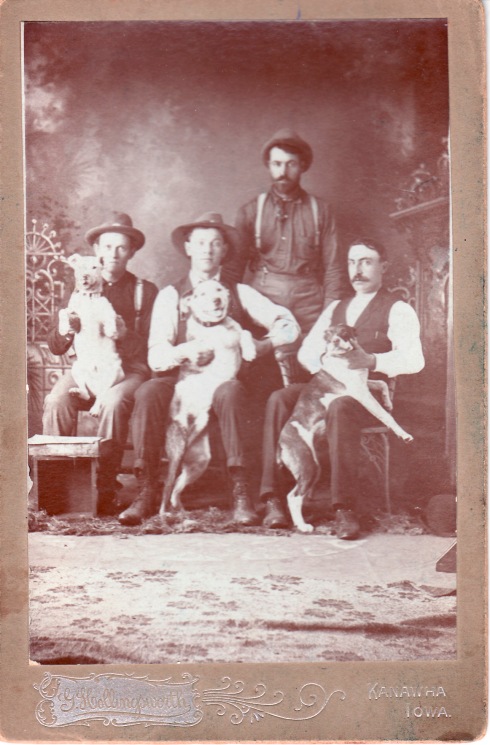 I sit here typing with two Toy Poodles on my lap.  (I come from a long line of animal lovers!) Where did this love come from?  Until recently, I assumed this passion for animals was nurtured through childhood.  Certainly that is part of it, but I was intrigued by last week’s episode of TLC’s Long Lost Family, in which a woman was introduced to her biological father.  While they had before never met, father and daughter learned they had one huge thing in common – a love for animals.  Both were involved with animal foundations and rescue programs, and considered animals to be a huge part of their lives.  Could this love of animals be partly genetic?  END_OF_DOCUMENT_TOKEN_TO_BE_REPLACED

Comments Off on The animals of my ancestors | posted in My Family Lines, Pictures

A very young me with my maternal ancestors

We are the chosen in each family

There is one who seems called to find the ancestors.

To put flesh on their bones and make them seem alive again.

To tell the family story and to feel that somehow they know and approve.

Doing genealogy is not a cold gathering of facts but instead breathing life into all who have gone before.

We are the story tellers of the tribe.

Do you have a favorite poem or quote that explains your passion for genealogy?