A morning with the Bradstreets

Yesterday was quite an adventure! We took the subway to Braintree, MA, only to find that the trains to Plymouth had been canceled about 3 month ago. So, we decided to rent a car (had planned to do so that evening anyway) and drove to Plymouth. Had hoped to see the home of Jabez Howland, son of John Howland, my pilgrim ancestor. (I’m quite proud of the fact that MY ancestor fell out of the Mayflower and was pulled back in – what a goof ball!) Would have been nice if the tours of the house were still going, but they’d already stopped for the day by the time we arrived.

This morning we set off for Ipswich and Rowley, Massachusetts, neighboring towns where my colonial ancestor Humphrey Bradstreet resided. Humphrey emigrated from England to the U.S. in 1634 and shortly thereafter was granted land in what became the town of Ipswich, Massachusetts.

Humphrey Bradstreet’s Farm, in the Bradstreet family from 1635-2007

The farm is thought to the be the oldest farm in the U.S. The Bradstreets originally farmed onions, but this venture was changed to cows when the “onion maggots” ruined the crops. The Bradstreet farm remained in the family from 1635 to 2007, when it purchased by the town of Rowley, Massachusetts. The current barn on the property was constructed about 1774, and the house about 1850. 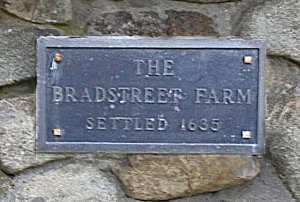 Much to my delight, the town is seeking to sell the home and barn along with seven acres to someone interested in farming. While not practical for us to purchase, it provided great discussion for us today – quite a fantasy, envisioning a move to Massachusetts to live on my ancestor’s farm! Ed suggested we become potato farmers and also have a winery. I don’t think we could support our family farming potatoes, but hey, fantasies don’t have to make sense!

Inside of the Bradstreet barn

In addition to the Bradstreet farm, the town also owns a second Bradstreet property, called the Platt-Bradstreet home, which currently houses the historical society.

The Platt Bradstreet home contains many ancient Bradstreet relics, along with other items owned by other early Rowley settlers. Of particular interest to me, of course, were the items from Bradstreet family members. Thankfully, I’d made an appointment with the historical society and Ed & I had our own private tour of both Bradstreet properties.

The Bradstreet family apparently used this tool for shoe making

Standing on the ground where my 10th great grandfather lived, and where my 9th great grandfather was likely born, was quite overwhelming. I wanted to take in every detail, and spent a lot of time looking at the landscape, the trees, focusing on what my Bradstreet ancestors saw when they looked outside their windows. As fabulous as it was to simply be on their land and in their barn and homes, even more impressive was seeing the Bradstreet coat of arms.

Lastly, we visited the “Old Burial Ground” in Rowley, and saw the gravestone of my 9th Great Grandfather, Capt. Moses Bradstreet, who has the oldest stone in the cemetery (buried 1690).

This entry was posted on Monday, June 20th, 2011 at 7:11 PM and posted in Research Trips. You can follow any responses to this entry through the RSS 2.0 feed.
« Today’s Adventure – NEHGS
I’m hooooooooome – here in Bar Harbor! »

One response to “A morning with the Bradstreets”