Autosomal DNA. One of the most powerful tools in the genealogist’s toolbox! No, it will never, ever replace the elbow grease required in completing an accurate family tree (nor would I want it to – it would spoil the fun of the hunt!), but used correctly, the results are incredible!

I’ve previously shared how I used autosomal DNA to determine the parents my third great grandmother, Cynthia Day.   (You can read the post here.)  No, the DNA itself didn’t tell me who they were, but cousin connections put me on the right path. I can now state with confidence that Cynthia’s parents were Aaron Day and his wife, Martha.

As we all know, one answered question often leads to several more inquiries. So now: who is Martha? While I was hopeful that maybe one day DNA would provide clues to that answer, I put the question on the shelf and didn’t pursue it further. I figured it would be a puzzle to be solved some time in the future. However, the future came considerably faster than anticipated! Thanks to an email from another cousin connection on FamilyTreeDNA, I was given a few hints.

First, some background info. What was known about Martha was minimal:

I searched through a dozen rolls of microfilm, starting with Starks and working outward, hoping to find the marriage record of Aaron and Martha. My search was in vain, but I became very, very familiar with families that lived in the locations around them, and one name in particular stuck with me: BUMPS/BUMPAS.

So it was with considerable interest that I learned of a FamilyTreeDNA match who had a BUMPS in her family tree. Even more interesting, her ancestor, Mary (Tibbetts) Bumps named a son, AARON DAY Bumps. Bingo.

As exciting as this find was, we know that DNA does not replace a paper trail. We still need a healthy dose of elbow grease (and many hours of lost sleep!) to verify whether or not our hunch is correct. After all, our suspected DNA connection may be in a different branch of the family tree.

Here is the evidence gleaned that supports my conclusion: Martha Tibbetts was the daughter of Rev. Nathaniel Tibbetts and his wife, Elizabeth Alley. 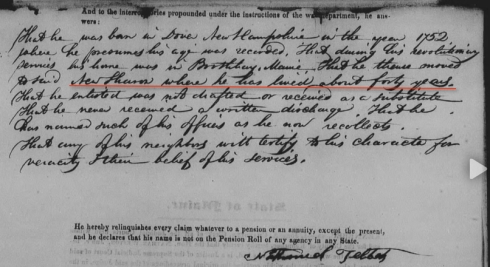 Declaration in Revolutionary War pension file of Nathaniel “Tebbets” dated 28 Aug 1832.  He states he had lived in New Sharon about 40 years.

The map below shows the locations of the Days and Tibbetts, along with those of the family’s friends, associates and neighbors (FAN Club). 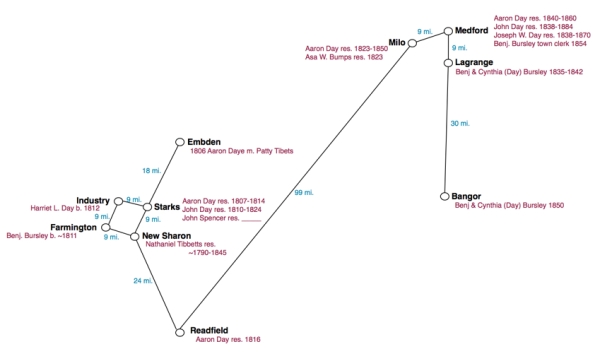 Martha Tibbetts had several sisters, all of whom married local men. As expected in a small region, the families intermarried and clearly had close relationships. The chart below shows these connections in relationship to Aaron and Martha’s family. 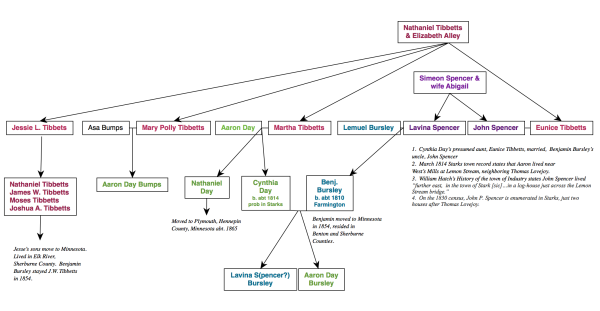 Pension files – what a great source of information! The affidavit of Francis Day above is another piece of solid evidence that the Day and Tibbetts families were related.  While I have many more rolls of microfilm on order to obtain original copies of the information presented here, I’m confident that Martha’s family has been found.

In all of us there is a hunger, marrow deep, to know our heritage – to know who we are and where we came from. Without this enriching knowledge, there is a hallow yearning.

I think that our ancestors, on the other side, also yearn – they yearn to be found. Perhaps Martha is resting a bit more easily these days.

Special note of thanks:

vii. Jarvis, May Tibbetts. Henry Tibbetts of Dover, New Hampshire, and some of his descendants. Privately published, 1937. Copy held by Daughters of the American Revolution Library, Washington, D.C.

This entry was posted on Sunday, February 15th, 2015 at 5:05 PM and posted in Bursley, Day, DNA, My Family Lines, Tibbetts. You can follow any responses to this entry through the RSS 2.0 feed.
« Photo books – share your family history (and still be invited to next year’s Thanksgiving dinner!)
Curio – the genealogist’s tool for organizing Evernote notes, Word and Excel files & more »